Live from The Hague… to Tarin Kowt

Afghans will see conference on TV

By our special correspondent Bette Dam

Inhabitants of the Afghan town of Tarin Kowt will be able to follow the International Conference on Afghanistan in The Hague in their own town – live on television.  All international television stations

will cover the meeting, but people in the remote capital of the southern province of Uruzgan will be watching intently, too –  if they have access to a TV set. That, at least, is the plan being worked on hard right now, says Abdul Waheed Hamidi of Afghanistan’s SABA-TV. He is still a little cautious because, after all, things may still go wrong trying to establish a link between the capital, Kabul, and the distant provincial town. But, as the journalist smiles and says: “Tomorrow, around lunchtime, they’ll be able to watch live in Tarin Kowt, Insha’Allah (God willing).”

Mr Hamidi explains that his station has been broadcasting to Tarin Kowt and surrounding area since 14 March this year. Up until then, people mainly got their television via satellite dishes, although those kinds of dishes are somewhat taboo: “With the old traditions that exist there, having a dish like that on your roof only raises suspicions. Neighbours and relatives are quick to think that you’re watching a totally different type of channel… like porn, for example. That’s why a lot of people don’t have a TV. But we broadcast from a transmitter, and that’s more widely accepted because they know it’s coming from Kabul.” 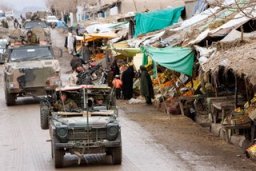 After the enthusiasm generated by two week’s broadcasting in Tarin Kowt, which the TV journalist describes as a ‘revolution’ for the town, Mr Hamidi decided that he also wanted to show the high-level conference in The Hague on his TV station. “That’s all part of it, don’t you think? As a journalist I want the latest news.”

He wants to have five hours’ live coverage from the conference on TV screens not only in Kabul, but in Karin Towt too. That is, however, a rather costly venture, Mr Hamidi says. “Because I want to do it any way, I turned for help to the charity OXFAM Novib and the Dutch embassy.”

The necessary support was soon forthcoming and SABA television could get down to work. Two of Mr Hamidi’s colleagues from Afghanistan are now in Amsterdam to handle the transmission of the TV signal back to Kabul and then on to Tarin Kowt. Mr Hamidi isn’t sure how many people in Tarin Kowt will actually end up watching to see how, for example, their president Hamid Karzai performs at the meeting. For one thing, no one knows how many families have a TV set in their home. In addition, many parts of the town simply have no electricity during the day. But Mr Hamidi is optimistic all the same: “This is going to be a good thing for Tarin Kowt.”